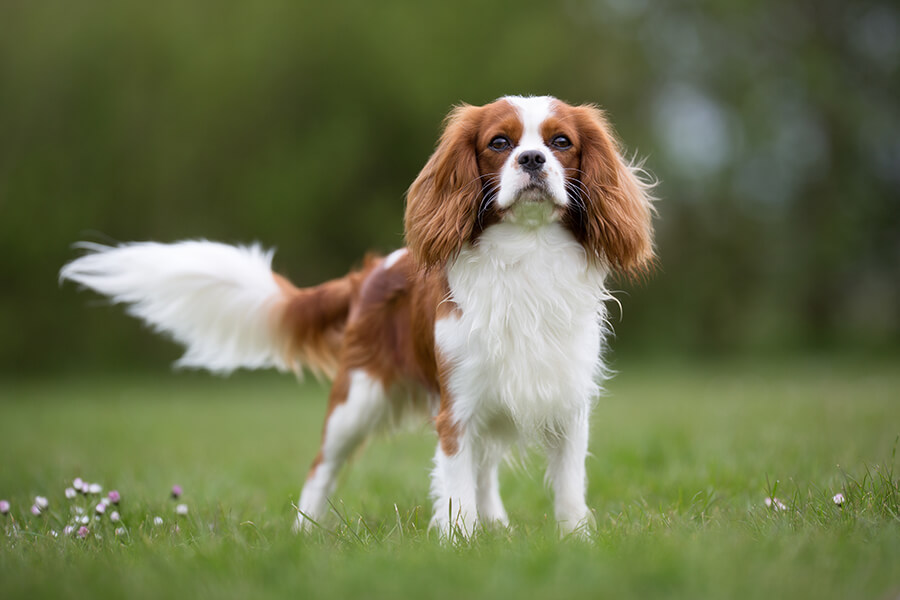 Cavaliers are a trustworthy, reliable and super affectionate with people and children of all ages.
They are intelligent, easy to train and quick to learn. They are  also very adaptable, and Cavaliers are just as happy living in an apartment as they are in a house, provided they are given lots of exercise and mental stimulation. They are a great choice for first time dog owners given their intelligence and willingness to please. Cavaliers are not known as ‘barkers’ and generally only vocalise when they need to say something.
This breed are also very social by nature which means they tend to get on with everyone which includes other animals and pets they have grown up with as well as others they meet. Cavaliers make wonderful companions for older people because they are loyal, loving and always willing to please their people.

This loveable breed do not make good guard dogs as they are so people loving, and also are known to suffer from separation anxiety if left alone for too long. They enjoy company and being the centre of attention.

Where did Cavaliers originate?

The Cavalier King Charles Spaniel is one of the oldest toy breeds, and it’s believed they originated in Japan and the Far East. The Cavalier is physically larger in size than their cousin the King Charles. They are renowned for being gentle and mild mannered, and not known for expressing anger to people or other pets. Cavaliers are also great with children, and become part of the family either in an apartment or house.

In Tudor times, Cavaliers became fashionable as lap dogs who kept the hands of upper class ladies warm whilst they travelled by train. The links with royalty endeared the term “King Charles” with this breed, and links with aristocracy strengthened over time. In fact, King Charles II rarely went anywhere without his Cavalier in toe. As a recognised breed, it only was in the 1970’s that Cavaliers became popular on the dog show circuit. In the 1980’s interest in the breed grew, and by the early 1990’s Cavaliers were prominent show dog winners as a result of their affable nature and manner. Ever since, the Cavalier has become one of the most loved dog breeds in Ireland and across the world.

Cavalier King Charles Spaniels boast lovely coats that comprise of silky, long and straight fur that is curl-free. They have a tremendous amount of feathering and their coats should never be trimmed. They come in a variety of colours which are acceptable and recognised by the Kennel Club colours which are as follows:

Cavaliers are renowned for their unique looks and colouring, with some having a distinctive spot between their eyes at forehead level.

Does a Cavalier King Charles Have a Good Temperament?

Cavalier King Charles Spaniels are exceptionally generous and sweet by nature. They are low maintenance and not very demanding.They are extremely loyal and affectionate by nature as well as being playful which are just some of the reasons why the breed has been so popular not only here in Ireland, but elsewhere in the world too for such a long time. Also, they are such gentle and friendly little dogs makes them extremely popular. They are not aggressive in any way, and make great companions for other pets & people. They do not want to be left alone, and ideally want to live in a household where someone works from home. Plenty of playtime for this intelligent breed!

Are they a good choice for first time owners?

Cavaliers are a great choice for first time dog owners because they are renowned for being so loyal, affectionate and eager to please. They thrive on being in a home environment and will happily snuggle up to their owners whenever they can. Because they are so amenable and intelligent, Cavaliers are mostly easy to train which includes obedience and house training.

Will a Cavalier Bark too much?

Cavaliers are not known to be excessive barkers, more especially if they have been well socialised from a young age which would involve them meeting lots of new people, dogs and other animals. But with this said, they are so social by nature that they tend to get on with everyone and everything although they would always let an owner know when there is someone at the door. Generally speaking, Cavaliers only “vocalise” when they feel the need to be heard. They are respectful of other people & pets, therefore if they bark you can accept is a genuine call for attention. Cavaliers do not make good guard dogs as they are so people friendly, however they will alert their owner to any intruders.

Will a Cavalier be easy to train?

Cavaliers are undemanding and extremely affectionate dogs which makes them easier to train than many other spaniels and dogs in general. They are very receptive to new information and respond to instructions. Some Cavaliers are known to be less resilient than others, and can decide to “quit” a training programme if the mood takes them! Once well socialised as a puppy, Cavaliers go onto train very easily and learn quickly. Some Cavaliers are so cute as puppies that people forget to set boundaries for them. This is not to the puppy’s benefit, and it is important to maintain a training routine with clearly defined parameters.

Are Cavaliers safe with Children and Other Pets?

The Cavalier King Charles Spaniel is known to be extra sensitive and well mannered when around children of all ages, assuming they have been well socialised as puppies. They are generally very good around other pets also as a result of their compassionate nature. They are incredibly sweet natured and known to be undemanding, tolerant characters in all sorts of situations which is why the breed has been consistently one of the most popular choices as family pets.

As with all breeds, Cavaliers must be properly socialised as puppies and not weaned from their mother too early. Introducing a Cavalier to other pets or children should be done slowly and under adult supervision. Sometimes children can unsuspectingly provoke a mild mannered dog or cause it pain inadvertently, therefore supervision is always advisable and to leave unattended.