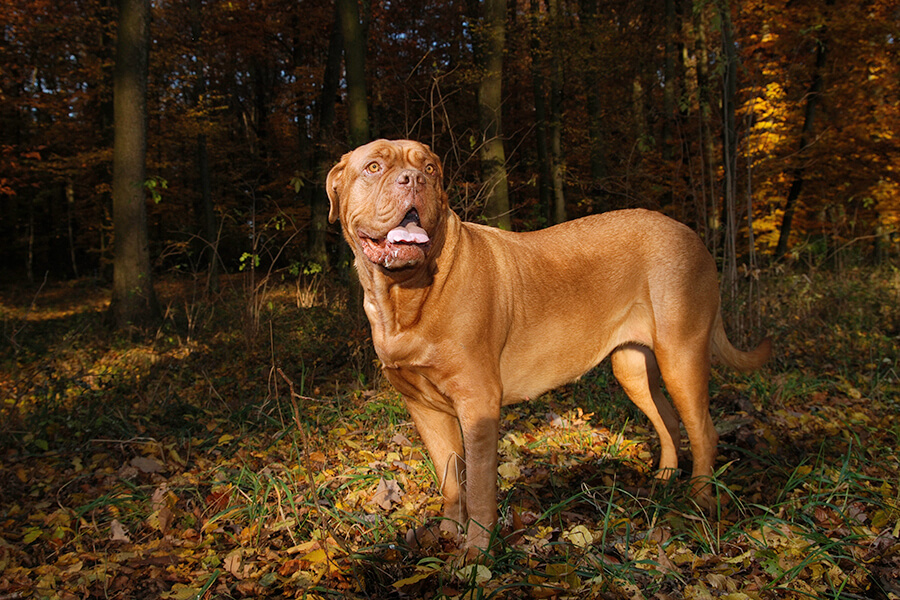 Typical concave lined brachycephalic molossoid. The Dogue de Bordeaux is a very powerful dog, with a very muscular body yet retaining a harmonious general outline. It is built rather close to the ground, the distance sternum-ground being slightly less than the depth of the chest. Stocky, athletic and imposing, it has a very dissuasive aspect.

Height should more or less correspond to the perimeter of the skull. Height at the withers For males 60-68 cm. For females 58-66 cm. 1 cm under and 2 cm over will be tolerated.
Weight Dogs at least 50 kg. Bitches at least 45 kg. Females Identical characteristics but less pronounced.

HAIR
Fine, short and soft to the touch.

COLOUR
Self-coloured, in all shades of fawn, from mahogany to isabella. A good pigmentation is desirable. Limited white patches are permissible on the forechest and the extremities of the limbs.

An ancient fighting dog, the Dogue de Bordeaux is gifted for guarding, which it assumes with vigilance and great courage but without aggressiveness. A good companion, very attached to its master and very affectionate. Calm, balanced with a high stimulus threshold. The male normally has a dominant character.

Quite supple for a molossoid. When walking the movement is free and supple, close to the ground. Good drive from the hindquarters, good extension of the forelegs, especially when trotting, which is the preferred gait. When the trot quickens, the head tends to drop, the topline inclines towards the front, and the front feet get closer to the median plane while striding out with a long reaching movement of the front legs. Canter with rather important vertical movement. Capable of great speed over short distances by bolting along close to the ground.