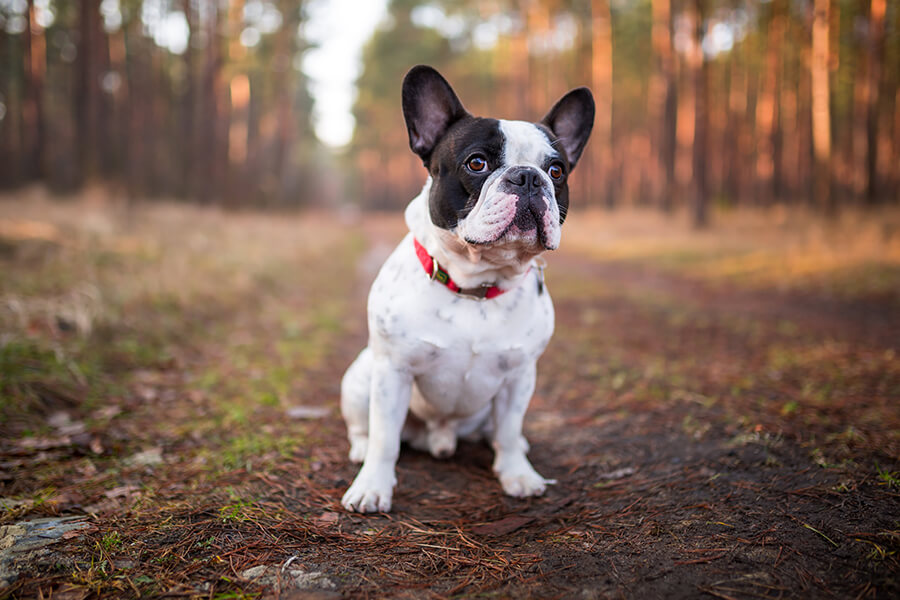 Where did the  French Bulldog Breed originate?

The French bulldog is believed to have originated as a relative of both the American bulldog and English bulldog. The French bulldog as we see it today, is a descendant from a breed that an ancient Greek tribe know as the Molossians bred. Some believe also that the French Bulldog originated from a native dog breed in Peru, that is now extinct. When bull baiting was outlawed in the UK in 1835, people looked for other purposes for the breed.As the industrial revolution grew in the UK, people emigrated to France and brought the breed with them. The French Bulldog became synonymous for “warming the lap” as they accompanied their owners on train journeys. People began to cross them with other terrier breeds and pugs in particular. It was then noticed that the French Bulldog was a very friendly breed, and always wants to entertain! So much so, that they were know as “clowns” given their individual performances for people. As the breed became more established in France, the French Bulldog became a fashion & elite symbol amongst the Parisien aristocracy. Today, the French Bulldog is established as one of the most popular dog breeds in Ireland and across Europe given their friendliness and willingness to please owners & families alike.

Will a French bulldog be good with children & other pets?

When a French Bulldog is well socialised from an early age, they develop good social skills around people and other dogs. As a breed, they are generally recognised as being playful, gentle and considerate around children and other pets. This gentle nature has made them very popular pets.It is important that children do not inadvertently antagonise any dog, as such can always provoke a reaction in any breed. It is important to teach children how to behave around dogs, and when to leave a dog alone especially around meal times and when it’s chewing. PetBond always recommends that any interaction of toddlers and young children with a dog is supervised by an adult to ensure that things stay calm and never become too rough.

French Bulldogs do have a strong prey drive, and therefore if alerted can chase cats and other smaller creatures in their line of sight. When a French Bulldog has been reared with a cat, this is less likely to occur. Always slowly introduce a French Bulldog to other pets, as this allows better interaction and bonds to develop.

Will a French Bulldog adapt to living in an apartment?

Yes, French Bulldogs are ranked in the Top 10 of dog breeds most suited to living in apartments. As with all breeds, it’s important to make the environment as entertaining and stimulating as possible for your dog. These guys may be small, however will still need their daily exercise and plenty of play time! They are the most entertaining breed, and absolute characters. They are highly intelligent despite their “clownish” antics, and will do anything to entertain and satisfy their owner. They will adapt very well, and enjoy watching TV on the sofa as much as they do playing outside with you.

As a First time dog owner, is the French Bulldog a good choice?

French Bulldogs are a great choice for first time owners because they are always so amenable and eager to please. They make wonderful companions and family pets because they thrive in a home environment loving nothing more than to be involved in all the action and every conversation. They want to be the centre of attention and will reciprocate this love ten times to you in return!

How much daily Exercise does a French Bulldog need?

Certain breeds such as “working dogs” use alot of energy, and therefore require alot of exercise to replace this innate breed instinct. PetBond regards the French Bulldog as a 3/5 for exercise needs (where1 is very little and 5 is alot), and multiple small walks each day are preferable to longer ones, and 3 twenty minute walks would be preferable. This way, your dog can be both physically and mentally stimulated whilst outside, enjoying what nature also has to offer. What great reason to get you outdoors also! Be careful in hot & warm weather, as sometimes French Bulldogs can overheat. They are Brachycephalic dogs, which means that their airways are narrower than other breeds. Should a dog overheat, their core body temperature can become hypothermic and result in shock. In the summer or very warm climates, walk when the sun is not out and in the shade. Always have water at hand.

Does the French Bulldog breed suffer from separation anxiety?

French Bulldogs form very strong bonds with their owners and as such they can suffer from a condition known as separation anxiety if they find they are left on their own for any length of time. As such they are better suited to households where one person stays at home and can offer them plenty of attention and time. With plenty of interaction and stimulation, separation anxiety in French Bulldogs can be offset, and as a result any “tantrums” resulting in unwanted destructive behaviour.

> They have either rose shaped or bat shaped ears

> A 9 year old French Bulldog named Bugsy adopted a baby orang-utan called Malone and looked after it until the baby was old enough to join the mature orang-utans.

What size should a  French Bulldog be?

French Bulldogs are small, yet well muscled dogs.They have a low body fat ratio, and their skin is well defined by folds on the forehead.

What about excessive barking?

French Bulldogs are not very vocal, and as such do not like the sound of heir own voice. However, if they are left alone for too long and develop unwanted behaviours, they can vocally express their frustrations. It is therefore important to train these puppies properly and realise that when they do vocalise, they are telling you that something is on their mind!

French Bulldogs are not particularly fond of water and are not very good swimmers. In fact, it would be fair to say that a French Bulldog would sink like a piece of lead if it jumped into water. Be careful rounds lakes & ponds as it is highly dangerous should your pet jump in.

Would my new French Bulldog make a good watchdog?

Not really! They are good to let you know when they sense a change in their environment, however are so friendly that they would not be alerted by an intruder in many cases.

Is a French Bulldog easy to train?

A French Bulldog always wants to please it’s owner, therefore is very amenable to proper training. They can have a stubborn streak in them, however good training as a puppy with clear & repetitive instructions is highly effective. Using positive reinforcement the French Bulldog will learn quickly, and develop positive lifelong habits. Some can take more time than others, however perseverance usually does the trick.