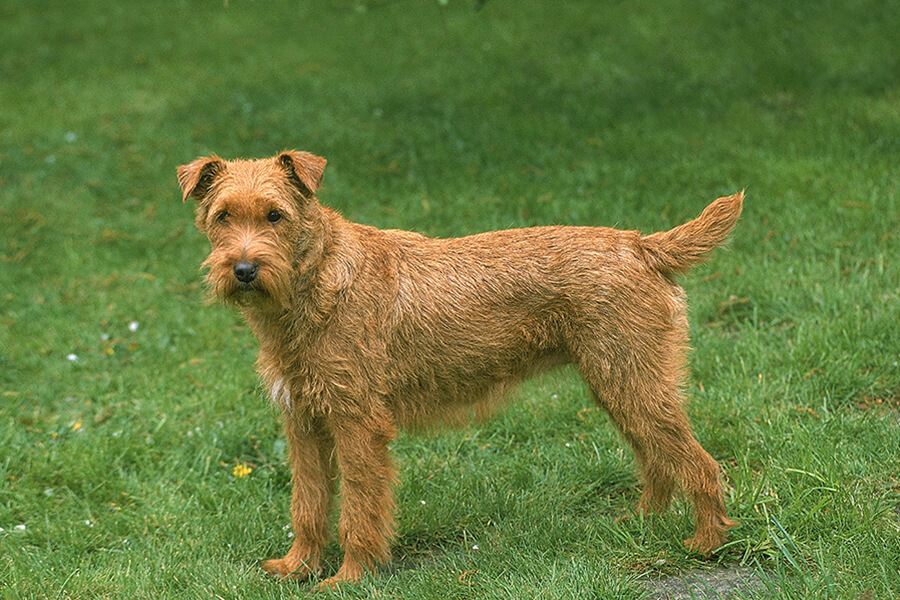 The dog must present an active, lively, lithe and wiry appearance; lots of substance, at the same time free of clumsiness, as speed and endurance as well as power is very essential. The Irish Terrier must be neither “cloddy nor cobby” but should be framed on the “lines of speed” showing a graceful racy outline.

HAIR
Should be dense and wiry in texture, having a broken appearance but still lying flat, the hairs growing so closely and strongly together that when parted with the fingers, the skin cannot be seen, free of softness and silkiness and not so long as to hide the outlines of the body, particularly in the hindquarters and free of lock or curl. Hair on face of same description as on body but short (about three-quarters of a centimetre long), almost smooth and straight, a slight beard is the only long hair (and it is only long in comparison with the rest) that is permissible and is characteristic. A “goats” beard is suggestive of there being silky and bad hair running through the coat generally. Legs Free of feather and covered, like the head, with as hard a texture of coat as body but not so long.

COLOUR
Should be “whole coloured” being red, red-wheaten or yellow-red. White sometimes on the chest. A small amount of white is frequently to be seen in all self coloured breeds.

The Irish Terrier, while being game and capable of holding his own with other dogs, is remarkably loyal, good tempered and affectionate with mankind, but once he is attacked, he has the courage of a lion and will fight to the bitter end. The dog’s reputation for getting into scraps with others, sometimes even in the showring, is undeserved. Though the terrier may be fierce when the circumstances call for it, the Irish Terrier is easily trained and a gentle pet, living up to his early description as “the poor man’s sentinel, the farmer’s friend and the gentleman’s favourite”.

Fore and hindlegs carried straight forward and parallel, elbows move parallel to the axis of the body, working free of sides, stifles neither turning in nor out.