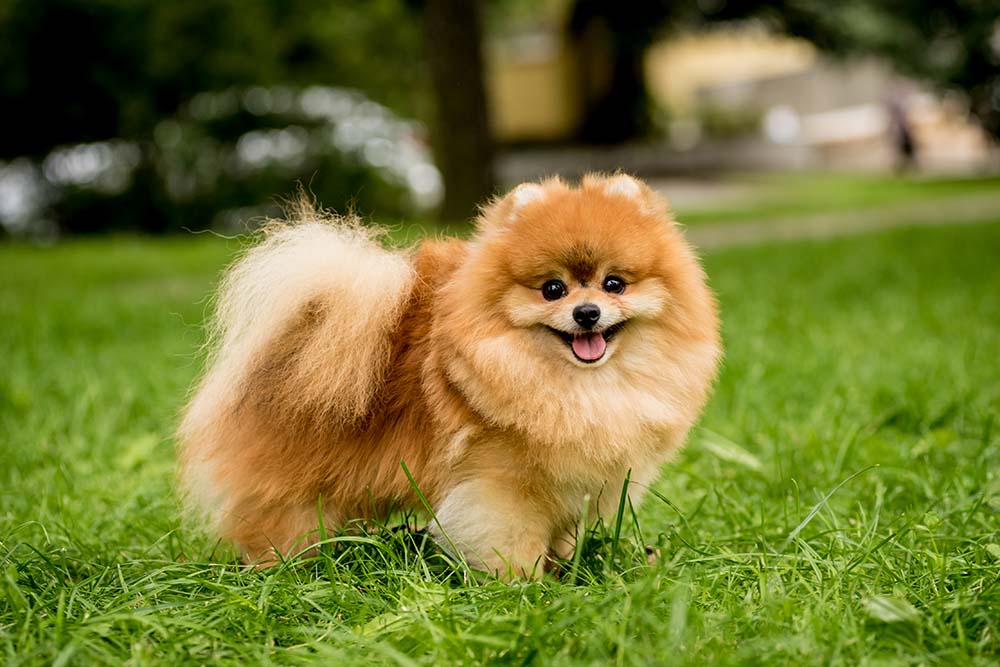 The Pomeranian may be tiny, but they are real extroverts and they boast very kind and affectionate natures. They are the tiniest of the Spitz-type dog and have very fox-like looks all wrapped in a bundle of fluff. They boast an interesting ancestry with the German Spitz being one of the dogs used to create the breed with Queen Victoria popularising these little dogs during her reign in the 1900’s.

Today the Pomeranian is as popular in Ireland and elsewhere in the world all thanks to their sweet temperaments paired to the fact these little dogs are super intelligent and love nothing more than to please. They form extremely strong bonds with one person in a household, but are always friendly to other members and people they meet more especially when a Pom is well-bred, nicely socialised from a young age and in a happy environment.

Where did Pomeranian breed originate?

The Pomeranian was named after the region between Poland and Germany called Pomerania where they were developed. However, their ancestors are larger Spitz-type dogs that hail from as far afield as Russia, Siberia and other Arctic regions. Spitz dogs were at the time usually much bigger than the modern Pomeranian we know today with paintings from the 1700 and 1800's depicting their forerunners as being that much larger.

The exact origin of the various breeds that played a part in creating the modern Pom remains unknown. However, by the time Queen Victoria came to the throne, they were gaining in popularity in England as well as the rest of Europe. Queen Victoria established a kennel to breed from her favourite breeds, amongst which were her beloved Pomeranians which as a result promoted these little dogs throughout the UK even more.

She had one particular favourite dog which was a red sable Pom called 'Windsor's Marco'. This dog was small, even by Pomeranian standards back in the day and such was her preference that breeders immediately started to produce smaller and smaller Poms. It is reputed that in Queen Victoria's lifetime, the Pomeranian decreased in size by almost half, giving rise to the Pom we know as a popular companion today.

In 1891, the first Pomeranian club was established and a breed standard was set shortly afterwards. These tiny dogs continued to grow in popularity and were firm favourites with well to do ladies of the era. Indeed, two Poms were among the 3 dogs to survived the sinking of the Titanic in 1912, having both been saved by their lady owners. Today, Pomeranians are still one of the most popular choices as companion dogs thanks to their small stature, their adorable looks and their loyal, affectionate natures.

Pomeranians are small dogs that boast a thick, plush coat. They have a very fox-like look about their heads and they often seem to be smiling. Their heads are large in relation to their muzzle which is finely chiseled. Their nose colour matches their coat and the same applies to the colour of a Pom's eyes which are oval in shape and set nicely apart on a dog's head. However, eye rims are black.

Their ears are small and set not too far apart or too low on a dog's head which they carry upright. Poms have strong jaws with a perfect scissor bite where their upper teeth neatly overlap their lower ones. Their neck is short, but well set into the shoulders which are clean and nicely laid back. Front legs are fine and straight and moderately long in relation to the rest of a Pom's body.

They have short backs and compact nicely ribbed bodies that give these little dogs their "barrel" look. Chest are deepish but not too wide and hindquarters are fine boned with dogs boasting small, compact and very cat-like feet. Tails are set high and profusely covered in harsh, long hair that spreads over it and which turn over a dog's back, a characteristic these little dogs are known for.

When it comes to their coat, the Pomeranian boasts having a double coat with the outer coat being long, flat and harsh to the touch whereas their undercoat is soft and fluffy. Their coat is more abundant around a dog's neck and on the front of their shoulders and chest which forms their unique "frill". Their forequarters, thighs and back legs are nicely feathered adding to a Poms delightful appeal. Accepted colours include the following:

Dogs with cream coats have black noses and black eye rims. White coated Poms must be quite free from lemon or any other colour. A few white hairs, in any of the self-coloured dogs is allowed.

How should a Pomeranian move?

Pomeranians have a bouncy action, they move freely in a brisk manner that adds to a dog's look of self-importance.

What do the kennel club look for?

The Kennel Club frowns on any sort of exaggeration or departure from a Pom's breed standard. The seriousness of a fault would be judged on how much it affects a dog's health and wellbeing.

Male Pomeranians should have both testicles fully descended into their scrotums. It is also worth noting that the size and weight of a Pom as set out in the Kennel Club breed standard is to be used as a guide only. Therefore, a Pomeranian can be slightly bigger or smaller, they can weight slightly more or less that stated in their breed standard without showing any exaggeration.

Does the Pomeranian have a good Temperament?

The Pomeranian forms a very strong bond with one person and therefore they are not the best choice for first time owners and more especially families. They are however, the ideal dog for someone who is familiar with the breed or this type of extremely loyal, small dog. As previously mentioned, these Poms may be tiny in stature, but they boast heaps of personality and are renowned for being total extroverts. Being highly intelligent, the Pomeranian knows how to get their own way which is why they need to be well trained from a young age and not the best choice for novice owners who might see their pets get the better of them.

Poms are very quick to learn new things which includes the good and the bad. If they are allowed to get their own way, they tend to show a more dominant side to their character which often results in dog becoming wilful and unruly therefore harder to handle.

It's essential that puppies be well socialised from a young age for them to grow up to be well rounded, happy characters. They have no idea of their size which can be a problem when they meet other dogs which they will happily take because it's in their feisty nature to do so regardless of big other dogs happen to be.

Are they a good choice for first time owners?

A Pomeranian is a good choice for first time owners providing they have a lot of time to dedicate to their canine companions, bearing in mind that these little dogs form a very strong tie with one member of a family which is typically the person who takes the most care of them and who spends the most time with them.

What about prey drive?

Although small, Pomeranians are feisty and they have a high prey drive. They will take on the world more especially if they have been well socialised from a young enough age. A Pom would chase an unfamiliar cat away if they ventured into their territory without hesitation.

Is a Pomeranian playful?

Poms have a real sense of humour and because they love being the centre of attention, they like to entertain their owners with all the antics they get up to. They remain very puppy-like well into their senior years which is one of the reasons they are such a joy to share a home with.

Pomeranians are adaptable little dogs and are just as happy living in an apartment in town as they are living in a house in the country.

Will a Pomeranian bark too much?

If not corrected from a young age, some Pomeranians can grow up to be real "barkers" and even when they have been well trained, they often still like the sound of their own voices. With this said, because they are so intelligent, a Pom can be taught to the command "quiet", but might bark when their owners are out.

Being such small dogs, care should always be taken when a Pom is anywhere near water. With this said, some Pomeranians like water and can swim quite well, but they should never be allowed to jump in swimming pools because of all the chemicals that are used in them.

A Pomeranian is always quick off the mark to let an owner know when they are strangers about or when they don't like something that is going on in the environment. However, because they are such small dogs, they are not the best choice when it comes to being an effective watchdog.

Is a pomeranian easy to train?

Known to be very intelligent little dogs, Poms are willing and eager to learn new things which means they are pretty easy to train. However, they are known to be unpredictable at times which can make it a bit challenging to know how a Pom may react to something or someone. Their training and education has to be consistent and always fair, but these tiny dogs need to be handled with a firm hand for them to understand who is boss and their place in the pack.

With this said, it can be quite a challenge to housetrain them with perseverence being the key to success. It's also important to nip any excessive barking in the bud because Poms love the sound of their own voices which is less of a "bark" and more of a shrill "yap". Puppies need to be taught the basic commands as early as possible so they understand the ground rules and boundaries. It would be a mistake to leave it too long just because Poms are so cute because it could lead to a dog developing "small dog syndrome" which can make them harder to live with and handle. The first commands to teach a Pomeranian puppy are as follows:

Is a Pomeranian a good choice pet for Children and Other Pets?

Pomeranians are outgoing and alert little dogs and they form strong bonds with their families. However, they can be a little too over-protective which can become a problem especially when they are around the children and at meal times. They are not the best choice for people with young children because Poms can be a little snappy. With this said, any interaction between children and such a tiny dog has to be well supervised by an adult to make sure things don’t get too boisterous.

If they have been well socialised from a young age, they will accept being around other dogs although, they do tend to be a little "protective" around them which can lead to aggression. They do not tolerate small pets and animals which means any contact should be avoided. If a Pom has grown up with other pets in a household which includes cats, they generally get on well, but they will think nothing of chasing the next door neighbour's cat, especially if the cat ventures into their territory.